Australia Day always brings out the old question of What It Is to be Australian.  For a lot of people, Australia Day is a day to eat meat, drink beer and salute the flag. For many of us though, the flag makes us unpatriotic and ashamed. This is a pity. It shouldn’t be this way. The flag has, in part, been hijacked by misplaced patriotism as outlined by Clementine Ford in The Drum. If you read the comments, most of the criticism is that she is “out of touch” with outer suburban people. This isn’t correct. There are still many people in our outer suburbs who have the attitudes outlined by Ford.  I have experienced many, many people who fit Ford’s notion of people being “suspicious misers, greedily hoarding privileges we presume to be ours alone and gifted by the divine honour of Being Australian”.  The impression I have received from these people is that suspicion of these “boat people” is based on economic fear more than anything else. Of Muslims Taking Their Jobs. As a result, we see some young white Australians draped with the flag, when seeing people of different colours, pointing to the Union Jack and saying “this is our country”. These same people get aggressive when you question unquestioning patriotism and suggest that not everything is positive about Australia. Walk down to the major shopping centre in Campbelltown, Macarthur Square, and you will see this shirt, hanging proudly in front of the “Top Hat” shop 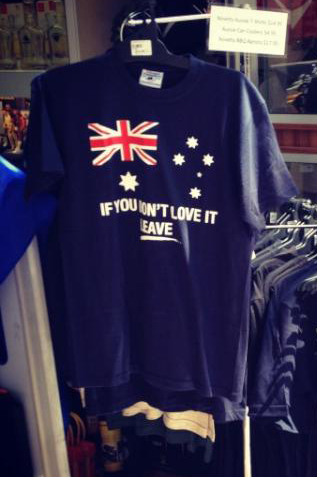 That tells people if you don’t love the country and the flag unquestioningly, leave. The idea of stifling argument is a very aggressive part of the conservatism that has gripped many – the same strain of aggression can be seen with the word “unAustralian”. The flag has become entangled with that attitude.

1. Read a Speech I think everyone should start Australia Day by reading this fantastic speech by Australian of the Year, Dr. Charlie Teo. It outlines what is good about Australia and what needs to be addressed in order to make it better.

2. Listen to Music. People could put on some Paul Kelly, Megan Washington or any good alternative band. Alternatively, you could put on some Australian Classical Music. We have written plenty and we should have it wafting through the house.  Here are some suggestions.

Carl Vine’s Piano Concerto for evocation of the stars

3. View a Movie  Watch one or more great Australian movies that show what we are and have been, like Kenny, Crackerjack, Shine, Love Serenade or Not Quite Hollywood.

4. Read Australian. Choose any author or authors. I think Women of Letters or even Hardy’s You’ll Be Sorry When I’m Dead would be a good relaxed and thought provoking read, as would any cricket book by Gideon Haigh. Ed Cowan’s In the Firing Line is a great book for anyone wanting to know what it is like to be a committed sportsperson in modern Australia.

5. Eat any Australian Produce You Like. Lamb appears to be the stereotype because Australians do like lamb – it is seen as “Australian”, even if sheep are a European animal.  Kangaroo is what Australians should eat if we want to be truly “Australian”. Maybe even cook it using methods perfected by indigenous Australians. Otherwise, we produce wonderful vegetables, fruit and various other non-meat options. We also produce wonderful salad dressings, olive oils, vinegars, chutneys. It amazes me that whenever you go to regional towns, there is always a local operation producing beautiful sauces.  Our cheeses are also excellent. Eat those.

6. Drink an Australian Microbrew or Non-Factory Wine. There is nothing particularly patriotic about drinking a VB or Tooheys, even if the multi nationals that sell them try to say that it is.  It is better to support small operations making craft beer and wine, to ensure that we have a variety of tastes. There are the Victorians – Red Hill, Red Duck, Holgate, 3 Ravens, Hawthorn, 2 Brothers, Mountain Goat, Hargreaves; New South Wales’ Lord Nelson, 4 Pines, Murray’s, Happy Goblin, Badlands, Mudgee; Queensland’s Burleigh; South Australia’s Brew Boys, WA’s Feral Brewers, Tasmania’s Moo Brew. Plenty to choose from. If cider is the go, Napoleone and Bilpin are two excellent Australian makers.  As for wine, there are so many good small non-factory wineries (who usually aren’t sold at Woolworths, BWS or Liquorland).  Independent shops or Dan Murphy’s sell wines made by smaller growers.

7. Have a Conversation. Many BBQs are marked by people pontificating and asserting. Maybe there should be less of this and more listening. I am pretty sure it’s an Australian thing to have an intelligent conversation where everyone’s views and respected and listened to. Australia has a huge array of potentially interesting conversations. Maybe use Twitter to think of a few issues to discuss.  Discuss why Australians are so scared of a few people coming in on boats, for example.

8. Enjoy the Day. Once you forget the aggressive, posturing nature of many people’s idea of “Australia”, Australia Day can be enjoyable. Especially if one went to Glenbrook, in the Blue Mountains, and saw the way people in the Mountains celebrate Australia Day. By having a Gnome Convention.