With each passing year of the Sydney Writers’ Festival, I attend less and less. Possibly this is because I get a chance to read fewer novels and longer form tomes; perhaps it is that I really don’t like queuing around the chaotic mess that is the set of wharves at Walsh Bay; maybe it is that I don’t like being trapped in a room for an hour when the discussion doesn’t interest me.  I don’t begrudge the pleasure people gain from such events – there are wall to wall earnest, funny and warm conversations about books, held in quiet and respectful settings. The event clearly nourishes many minds.

This year, however, we saw two outsiders take the event by storm – well, for an hour anyway.  Kevin Rudd interviewed Independent MP Bob Katter about his new book – An Incredible Race of People. Rudd set the tone early by making a point about their Queensland origins – this was framed as a way for Sydney people to try to understand how Queensland thinks.  Due to this framing, it seemed as though Rudd shepherded Katter through the experience as to not make him angry and confused, as being in Sydney seemed to be unsettling him.  As Rudd was explaining the questions from the audience in the last part of the event, one could see Rudd’s personalised diplomatic skills clearly in evidence. The line “they are a strange cattle here, Bob” from Rudd after a couple of strange grandstanding moments from the floor (including one from a man who resembles Rudd) summarised how Rudd was contextualising the event for Katter.

As the audience was taken through the history of Australia through the eyes of Bob Katter, it was a fascinating way of packaging it.  For one, there are no areas of grey for Katter. It is a history of Big Men doing Big Things. This is why we got tales of Men Who Built the Gold Coast and the tale of old political heroes such as former Queensland Treasurer, AWU Powerhouse and Scullin Government Tresurer “Red Ted” Theodore building mining infrastructure, free health care, sugar cane refineries, abattoirs and all sorts of wonderful nation building things. Our Roosevelt, Katter asserted – asserting that history was just this single narrative is the key to Katterhistory, or Katterstory.  That’s why he claimed at one stage that Robert Hughes’ seriously flawed and histrionic history of the early days of Australia, The Fatal Shore, was the best history ever written. It also explains why he liked to talk about the heroic actions of the AWU in the 1890s in terms of getting better conditions for miners and various other forces to get better conditions for shearers.

Katterstory is a history of Australia funnelled through North Queensland.  Katter’s family started as staunch supporters of the ALP.  Katter himself still sounds like a time machine of old ALP values.  That is why the story of the DLP / ALP split was told through the prism of how it came to be disengaged with the people of North Queensland. In a moment that Katter would probably align to the signing of the Declaration of Independence, he spoke of being in the room in Cloncurry where the split between the ALP and DLP occurred, with his father being a major player. In Katter’s eyes, it was at that point that the communists “who had taken over the unions” and the decent men of the old ALP split – causing a drift of “all the voters of North Queensland” away from the ALP and towards the Country Party.

This is the reason that Katter’s love for Edward Theodore, John Curtin and Ben Chifley is there, but also why he doesn’t show much love for Southerners who have taken the ALP away from the “big nation building” concepts of the past.  It also makes his liking for protectionism and increased funding for public infrastructure fit into the Katter profile. His sympathy for the DLP and B.A. Santamaria also explains his social conservatism, which because the topic for discussion towards the end of the session.

The flaws in Katterstory were exposed pretty easily by Rudd the friendly inquisitor – that his vision of “The Incredible Race of People” seemed to exclude indigenous people. Katter denied this, blaming his editor for suggesting that pieces about Aboriginal land title claims be excised. It did seem, though, that Katter’s “Incredible Race of People” included every Australian willing to work hard to build the country – no matter where you came from. In that vision, the First Australians made a big, influential and positive part. Indeed, Katter was glowing with praise for the First Australians he knew in North Queensland as well as migrants – like him – who made good. Indeed, he refers to himself as a part of the “Curry People” – non-white Australians who went to Australia to seek prosperity – the ones who fit the narrative that Big People Built a Big Australia. Though, these Big People, as Katter was at pains to point out, unassuming “regular” blokes.  In case you have noticed the preponderance of “men” in this version of history, Rudd also made mention of the blokeyness of it.

Those excluded from this Katterstory made their voices heard in the later part of the event, where Rudd raised the issue of ads aired as a part of the Bob Katter Australian Party campaign in the Queensland election. Such as one that showed millions of Chinese people invading Australia and this one about gay marriage.

Katter seemed genuinely disconnected from his own “party” at that point, saying with pride that North Queensland had a lot of people of Chinese background – and had indeed disciplined a party candidate about discrimination against those of Chinese heritage.  He hadn’t made the ads – they were his party organisation, who seem quite separate from him. He also said the ads were a political mistake he would live with for the rest of his life. Political life, mind you.  He also made light of the “ridiculous” line that he would walk backwards to Brisbane if there was a gay person in his electorate.

I suspected from today’s event that gay people – especially his half brother, Carl – confuse a man like Bob Katter, as they confuse a number of people from his generation.  My father was one such man – indeed, I see much in common between my father, who worked in North Queensland for a while, and Katter. The modern world confuses them a bit and both like to be their own men, pioneering and working. Main difference was that my father didn’t rage against the dying of the perceived light like Katter seems to do.

The event ended with a range of questions from the floor – and most of them were fairly useless at getting a good, well considered answer. That is because most of them showed that the questioners hadn’t read his book and were using the chance to ask questions more about his political activities and agendas.  This included Simon Sheikh from GetUp – who at least phrased his question in a polite and non-confrontational manner.  It did not get anywhere and made Katter more confused and angry. This happened especially when asked about his view towards gay marriage – to which he answered that people dying down mines and other issues relating to people in his electorate were more important than gay marriage.  What would have been more effective and respectful was to have read his book and then look for a part of it that would have fed into a question relating to whatever issue the people wanted to raise. I suspect, though, that for many activists, grandstanding is quicker and easier to achieve than reading a book.

It is easy to forget that this current position of Katter came about only because of the current oddball Federal political situation.  Katter was just the nutty local member for Kennedy for many years, uninterviewed, virtually unheard until this situation reared its head.  I said as much when it was clear we would have a hung parliament – I knew one of the most fascinating parts of it would be Katter’s rise to prominence.  This is why one cold night I started the #bobkatterfacts hashtag, the best examples of which were made into a poster by my partner.

We took that poster along to the book signing after the event for him to sign. We got into a conversation, where I talked to him about my father and the fact that the 18 months he spent at Gove in the Northern Territory had a greater impact on him than the 16 years he spent in Melbourne.  Katter was a gentle, friendly conversationalist. He was more than happy to sign it – despite the tag being mentioned on the front page of his party’s website, he had no idea about it.  He was fascinated by it and wanted a copy of the poster. His signature now makes it complete. 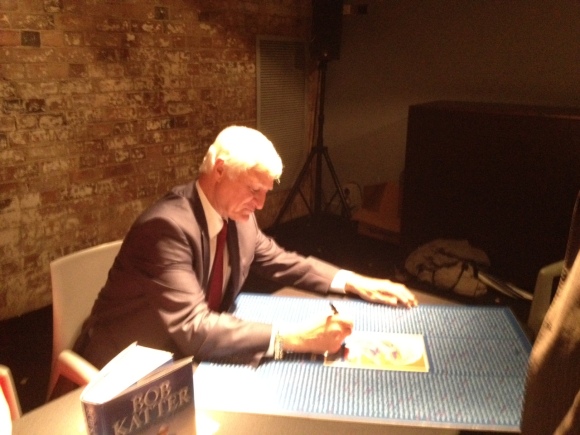 Today’s event confirmed for me my view that Katter is a time capsule of what many Australians thought and acted like before and after World War 2, as well as being from a hard place that most of the audience at the Sydney Writers’ Festival would never visit, except on holiday and only then in a resort.  His popularity in FNQ reflects more a belief amongst many that Australians should own Australia and that fashionable social “trends” like gay marriage aren’t particularly relevant to them. It also shows an ages old Queensland trend of believing in the cult of personality. They’ve had Joh, Peter Beattie and now Campbell Newman. And, of course, Bob.

This is not to say that Bob Katter should not be criticised, especially for his inability to walk in the shoes of others and see the shades of grey that are in contemporary society. Society has never really been as black and white and filled with heroic pioneers as Katter likes to say. Historically, he’s completely offbeam. For a start, John Hirst’s work on early Australia shows that Hughes is little more than a movie script researcher – and Katter should read Richard Waterhouse’s work on 19th Century Australia for a more accurate view of the events of the 1890s.  In terms of modern social policy, Katter is dangerous in giving approval for darker homophobic forces to take control of his name and image for their purposes.  It is also instructive how he contrasts with another independent minded politician, Tony Windsor, who has been able to better understand the nuances of the modern political and social structure.

It isn’t helpful to simply write Katter off and not respect him for his views and life experience. The people who were slow hand clapping and hissing him in the SWF audience should instead read his book to get a handle on how he thinks and see his worldview. They certainly weren’t lining up to have him sign his book. They would not probably agree with that worldview, but it makes us better people if we show respect to those who work hard for their community and care deeply for communities and individuals in the way Katter clearly does.  He is no absurd obsequious syphon like a Christopher Pyne or Eric Abetz, mindlessly churning out views about people they don’t seem to care much for.  Bob Katter is a fascinating character worth listening to and learning from.