There has been a lot of anger in the past couple of weeks expressed about the tour of one time alt-right celebrity and bad Gucci devotee Milo Yiannopoulos.  But that anger is fruitless and pointless in the face of what our commercial media seek on a daily basis – colour and movement.

Milo fits into the same media space as Pauline Hanson – a “what crazy / outrageous thing did he / she say today?”  Both also share a predilection for shirking from hard work and just drifting from media opportunity to media opportunity. And both are abject failures at all things other than gaining media mentions.   Milo, however, is an overseas version, therefore more exciting than our home grown racist troll. Hence, why there was an Opera House visit, but with a “difference”. It’s surprising he wasn’t photographed ripping the head off a koala.

There were fair few photos that summed up Milo’s schtick and the reason why he received so much coverage from sections of our media.

This photo neatly sums up the connection between Milo, Leyonhjelm and Hanson’s One Nation – all of them thrive from making loud, trolling responsibility free commentary on various issues, but almost always supports the Coalition in the Senate.  This shouldn’t have happened event in parliament was organised by David Leyonhjelm, who is closer to being Our Milo in sheer nastiness, but would love to have One Nation’s media pull.  Also of note – here is the memorably tinfoil Malcolm Roberts asking Milo whether there’s similarities between the Koran and Mein Kampf, from which even Milo recoiled. Little wonder Hanson encouraged Roberts to lose Ipswich so badly in the state election – even Roberts is too fringe for the Hanson Brand.

There is no good reason why former tennis blogger Daisy Cousens receives any attention or space in our media. In terms of her intellectually dishonest approach to argument, she picks more cherries than a backpacker in Young.   Hence why she and Milo are perfect together. Both have built for themselves a brand of ranting about “the left” that has fitted nicely into the business model of reactionary men wanting to stop social change.  The main difference is that Daisy is largely harmless and the main thing that feeds her brand are her appearances on the ABC and arguing with people on Twitter. Her other appearances, on the 3 Hours of Hate on Sky and Mark Latham’s Facebook show, barely exist on the radar. Milo, however, has done damage to many. 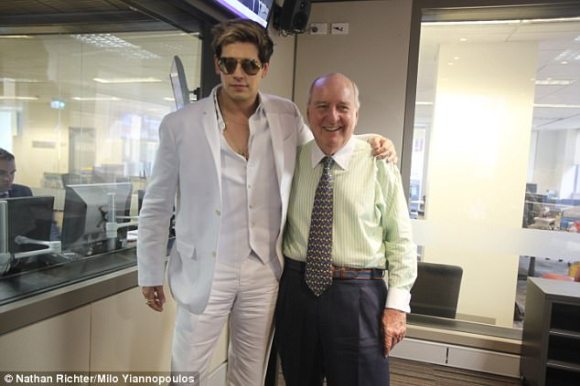 Alan Jones has built a career out of saying outrageous, responsibility-free things and being rewarded for it. Not a bad outcome for an ordinary English and History teacher.  He is the Milo of a previous age. I can envisage Milo having a radio show one day where he mixes mad, unhinged talkback with playing the hits of many decades ago, but on FM, not AM. He is already dressed for it.

This really bad New Wave revival band shows us how Australian media gives space to mendacious people who make the deliberate choice to make comments that almost never cause any pain to them, but are designed to cause maximum pain to others.  I thank my wife, Claire for the name of this new wave band, though I also like the @madcatjo2point0 name Daftwerk.

Why “Men Without Facts” works best is because such people dominate our commentary space, and this is why Milo was so attractive to them.  Who needs facts when you have racist, reactionary feelpinions?

It’s hard to tell whose career has hit rock bottom in this photograph. Latham is desperate to build a brand of ranty outrage to get on the same gravy train as Bolt, Cousens, et al, as well as Milo, but is failing miserably.   He made the mistake of not realising that Milo built his brand in a land where defamation laws are not a barrier to making responsibility free comment.  As a result, the Mt Hunter Hermit is getting caught instead in legal action as a result of his tweets.  This has seen him start to beg for people to give him money to fight the legal battle as well as keep his very strange Zeg Tribute Show on Facebook afloat.  Milo, on the other hand, might just be wondering who he is.

The whole Latham / Milo connection also helps us to further understand the absurdity of Latham’s pretence that he speaks for the marginalised and people in the outer suburbs.  They only know Milo the malted milk drink. This is why I laughed when I saw these ads posted on light poles next to Parramatta Rd in Concord, pasted over ads for dodgy nightclubs promotions, the poor old Sydney Kings basketball team and obscure overseas acts playing at the local RSL.

On the face of it, this could be seen as a considerable difference between Milo and Pauline. None of us can imagine her attracting much of a paying crowd at a club.  But it neatly sums up how they are very similar.  Hanson doesn’t need a pole or a tour to promote her repetitive, rationality-free tripe. She has our reliable commercial media, always up for a Pauline quote.  In addition, her party seem to have little trouble getting people to pay to be associated with her brand, having found replacements for these people.  And apparently, Milo’s tour gathered $1 million in sales. It seems that there’s enough reactionary men and women ready to bask in Milo’s abusive ejaculations that even Andrew Bolt found distasteful.  Milo will forget the people he met here but will enjoy the cash he has gathered from being yet another overseas failure who was inexplicably lauded here.

Or maybe he won’t forget this moment with T’ziporah Malkah, whose time as Kate Fischer was, like Milo’s, was dedicated to obtaining as many media mentions as possible. And got them they did. Because our commercial media never learns.

One reply on “Men Without Facts. The Milo Tour.”

I feel like Milo is wayyyy to old for it now…..
We need a young Milo. If indeed we need a Milo at all.