Do a google of the Sydney Morning Herald this morning and you’ll see this. 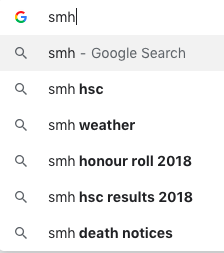 Countless parents, students, school teachers, education bureaucrats, consultants, all poring over the “success rate” figures for students and schools in the HSC examination. Only a select few of those schools reach the “honour roll”.  Each year, at the very top of the pops, the same schools regularly appear.

This is a gamed Top 30, with selective high schools routinely dominating that segment. They gathered the “talent” through their selective schools test. That’s how they obtained those students whose abilities to pump out high numbers were either natural, socio-economically produced or brought about by rigorous tutoring from the age of 10 and earlier. It’s good PR, though, as it provides the impression that public schools are able to “compete” with high fee Independent schools, whose students are socio-economically and culturally ready to pump out the “success”.

Meanwhile, your every day high school – the one most students are attending – are left on the fringes of the “Top 150”, dropping out, or climbing in, depending on a range of factors. I know, I have taught at schools that have been in and out of the Honour Roll.  And these aren’t all public schools going on the SMH Honour Roll rollercoaster. Catholic systemic schools and low fee outer suburban Independent schools go on that rollercoaster, and parents are watching for those stats like a hawk. So are teachers, Principals as well as education bureaucrats, knowing that parents are judging where they are sending – or, more importantly, where they are about to send – their students.

I don’t write this because my own students don’t reach these “honour rolls” and “success rates” lists.  They have, many times. So this post is not fuelled out of jealousy or self interest.  It’s out of frustration of how good teachers get punished for shallow journalism.  The day the HSC results come out – and, more crucially, when the SMH data crunching results are released – can be a brutal day for teachers. The thing is – there’s often little rhyme nor reason as to rises and falls.  I have seen many good schools go up and down from year to year – there’s no pattern, instead, it often depends on the quality of students in a particular cohort. However, this consideration counts for little in the often difficult aftermath of a “less successful” year in the charts – especially if the enrolment numbers at that school are threatened.

It is for these reasons HSC Honour Rolls represent so much that is wrong with the way we look at education.

For a start, the Herald definition of “success” is limited to an unhelpful amount. To be regarded a “success” in the HSC, students must achieve a result of 90 in a 2 Unit course, 45 in a 1 unit course – otherwise known as a Band 6 or Band E4.  Having taught students who have achieved these results, it is incredibly difficult to obtain them.  It requires a consistency across school based assessment and then in the external examination. There are often very different skills at play in both forms of assessment. While in English they may produce texts like speeches, feature articles, illuminated diagrams of key moments in a play for a school, the HSC examination is an old-fashioned set of handwritten 40 minute essays, a narrative and responses to unseen texts like poems and paintings.  In the essays, the Band 6 students are generally the ones who can pump out 9 – 12 pages of answers in each 40 minute segment. Students have to be good at both skills. And that’s just in English.

Yet the idea of “success” does not include, according to the Herald’s parameters, those who achieve a Band 5, or 80 and above in a 2 Unit course.  That is still an excellent result across the range of subjects offered in this state.  And if you study Standard English in NSW, it is almost the best result you can achieve. Routinely, less than 100 students in the entire course ever achieve a Band 6. Fewer than 1% of the candidates. I taught such a student, the only one (still) in the history of the school at which I taught (which, I will add, was a school which routinely has students who obtain Band 6s in Advanced English), and now I can imagine what it would be like to see a unicorn.  “Success” on the Herald scale is not something most Standard English students can achieve, even if they are very good students.  And Standard English is also not the only one in which it’s difficult for students to achieve a Band 6 – have a look at any course considered to be less than “elite” and you won’t see many Band 6s handed out.

If we have to judge schools via their HSC results (which is problematic in itself), it should be through its percentages of Band 5s that parents and the community can gain a more accurate idea of the “success rate” of a school. A solid range of Band 5s – especially if they are the higher end of the band – will gain students entry into most university courses. Schools with high percentages of students in that Band 5 category are teaching the bulk of their students well.  And yet, the Herald does not do this. That’s because the Herald seems to be more focused on an easy headline and easily crunched data than a detailed analysis of education.

It would be great if education reporting moved on from unrepresentative “success rates”, rather looking at how schools provide quality education that works to improve the skills of students they receive. This notion of “value adding” is not something seen in the Herald, but is seen through education management. If such value adding was the focus of media reporting, there might well be a different view being presented about selective high schools and high fee independents. More importantly, we might see a more realistic picture presented about the schools outside the inner ring of Sydney.

No wait, this is the Herald. Their editors and journalists don’t seem to care much about
“out there”. Looking through the stats on their site at schools from “out there”, they aren’t much of a “success” on their terrible, dangerous Herald scale.

Have any studies of NSW high schools been conducted of your based on your Band 5 proposal?